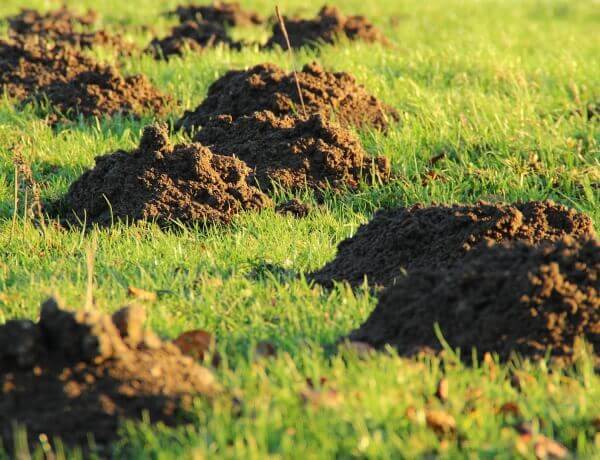 The first and most important step is to properly detect the presence of mole and locate the main mole runways or tunnels. Lawn damage caused by moles plagues homeowners and lawn care specialists alike. Seldom seen as they tirelessly tunnel underground, moles leave their telltale marks above ground as unsightly “mole hills”, mounds of soil, or grass less brown streaks.

Mole runways and tunnels can be indicated by mounds of soil created as they construct them. They will follow more less a straight course for some distance. Moles tend to follow fence rows, concrete paths or other man-made borders or follow a woody perimeter of a field or yard. Nest are commonly found along protected areas like fence rows or hedgerows.

Our technician’s will find the active mole runways and place baits underground. Moles consume the bait in the same manner as its primary food source, the earthworm. The bait mimics the earthworms size, shape, and feel.

Coastal Pest Control’s mole bait program works quickly and can kill in 24 HOURS.
Our technicians will perform follow up treatments to fully eliminate moles from your lawn and continuously keep the mole population from returning for THREE MONTHS

Once the moles are scounted.
Mole Info:
Moles have large appetites and may eat up to 100 percent of their body weight in one day. White grubs, earthworms, beetles, and assorted larvae are their principal foods. Moles feed primarily on insects that feed below the ground. Insecticide treatments to control the food source of moles rarely work due to insecticides inability to penetrate deep enough into the soil to kill all of the moles food sources. Insecticide treatments for control of grubs will cause more aggressive tunneling as it does reduce the amount of available food.
The tunnels that the mole excavates while searching for food may be used only once or may be traveled repeatedly. Moles may be active during any time of the day and seem to prefer cool, moist soil (the same as that preferred by grubs and earthworms).